Life isn't about finding yourself. Life is about CREATING yourself. - George Bernard Shaw -
17. June 2012

Ocean Kayak are one of the leaders in the sit-on top kayak market and were one of the first manufacturers to start making purpose built fishing kayaks with the initial Prowler kayaks coming on the market over 10 years ago. 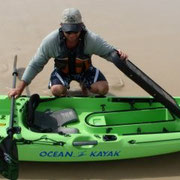 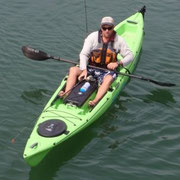 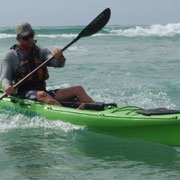 The Ultra 4.3 is the latest release within this range and boasts some of the most innovative features that we have seen in a paddling fishing yak.

The most obvious feature is the large, hinged centre hatch.  This has been designed to allow not only rod storage but also allows the fisherman to stow all their gear and even their catch.  This can be an advantage to avoid clutter on the deck and if paddling offshore it allows the fisho to stow everything (particularly your reels) when negotiating the surf. (Note: To stow rods and reels fully rigged owners need to add the optional internal rod tube inside the hatch compartment.  Recessed brass inserts are fitted to facilitate this option.) The hatch hinges from the front and is held in place with large rubber tabs – a bit like the tabs on a Waeco Esky!  Not only does the lid hinge forward but it can also be flipped so that your sounder can be easily stowed while negotiating the surf or while transporting your kayak.  The lid has a multitude of brass inserts to take rod holders, sounders, camera mounts, etc. The plastic on the lid is a little flexi so extended rod holders move around quite a lot.

The next noticeable upgrade from Ocean Kayaks previous models is the seating.  It features a plush EVA foam base that is super comfortable and a backrest that has variable height adjustment......it is a big improvement on the standard Ocean Kayak seat!  The new ‘ClickSeal’ front hatch has been welcomed by Ocean Kayak buyers and made accessing the front hatch an easier option than previous OK systems.

The rear well is shaped to take the optional insulated 1.1m ice box (Esky) as well as having attachment points and recesses for a livewell.  Another revolutionary feature is found underneath the kayak with major modifications to the transducer scupper recess.  It has now been shaped to fit a multitude of fishfinder brands including Humminbird & Lowrance and allows side imaging capabilities to work for your top of the line sounders.  There is also a 4 inch hatch behind the seat for accessing the hull to position batteries. While under the kayak we can also view the replaceable wear strip protecting the rear section of the hull.

The seat is fantastic....up there with the most comfortable I’ve found in a kayak.  Accessing rods and all your gear is easy with the multitude of options at your disposal.  If you are considering this kayak for yourself I would recommend at least having a sit in it before buying.  A few people that I’ve had paddle it have not been entirely comfortable with the large centre hatch, it does locate the legs in a slightly wider position compared to other kayaks.  I personally found it comfortable, as have the majority of people that have paddled it.  Also just watch the rubber tabs securing the centre hatch.  I’d recommend the use of ankle high booties to protect from any contact with these tabs, especially while in the surf.

I’ve read comments rating the speed of the 4.3 as being superior to others in the Prowler range, even compared to the Elite 4.5 that is longer.  Although I didn’t get a chance to make this direct comparison, the Ultra 4.3 does seem fast!  We tested it against another kayak of similar length and dimensions and the 4.3 won hands down.  A closer look at the hull shape, at the waterline, shows the 4.3 does have a little more efficient lines than its predecessors.

In the surf the Ultra 4.3 was more than adequate.  It punched out through the waves with ease and showed no signs of burying the bow when coming back in.  The rocker, and volume, in the nose of the Prowler kayaks has made this a performance feature of all the kayaks in the Prowler range.

The Ultra 4.3 is certainly a kayak for all occasions.  It would be happy out on the dam cruising along searching for Bass.  It would be at home in the estuaries/river chasing Bream and Mangrove Jack.  Most of all I think this kayak would be super excited to be offshore chasing a big Snapper or even Mackerel!  If you weren’t thinking of setting up a fishfinder and heading offshore at some stage, there are plenty of kayaks you could consider, this being one of them.  However, if you’re interested in searching the ocean for a fish that will scream line off your reel, tow you around for a while before one of you gives up, this would be one of only a handful of kayaks that I’d want for such a job.

Craig McSween of Adventure Outlet, who is also a Sea Kayak Instructor with Australian Canoeing, conducted this review.  For feedback on this review you can contact Adventure Outlet (Kayaking, Camping & Outdoor Store) in Southport on (07) 55712929 orinfo@adventureoutlet.com.au. For details on our fishing kayaks, go to http://www.adventureoutlet.com.au/fishingkayaks.html