Life isn't about finding yourself. Life is about CREATING yourself. - George Bernard Shaw -
17. June 2012

Ocean Kayak put a lot of thought into the design and features of the Prowler Torque. 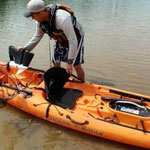 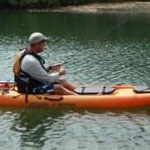 To be honest I signed up to do this review as a reluctant participant.  I fish from a kayak for the enjoyment of paddling as well as the challenge of catching a fish.  Electric motors on a kayak suit some people’s needs for a fishing kayak, but not mine, or so I thought!

The Torque is the one electric motored kayak in Ocean Kayak’s Prowler range.  It is equipped with a Minn Kota which provides 33lbs of thrust and is salt water compatible. The motor drops in to a slot in the rear well, straps in position and then plugs in with a socket similar to a trailer plug.  The speed is controlled by a dial positioned between the knees of the paddler and allows the fisherman to change from forward to reverse very easily.  A kill switch is located beside the speed dial which can be attached to the paddler so that your kayak doesn’t take off on you.

A unique, and clever, feature of this kayak is the position of the battery.  Most other electric motored kayaks position the motor, transom and battery at the rear of the kayak which tends to upset the trim of the craft.  The Torque positions the battery centred in the kayak and well recessed thus lowering the centre of gravity and increasing stability and safety.  If you choose to take this yak for a paddle you can simply remove the motor and replace it with a moulded detachable skeg and remove the battery creating a useful centre hatch.

The first time you take off in this kayak it feels pretty strange to not have a paddle in your hands.  At first I didn’t know what to hold on to...............the side carry handles seemed like the logical place.  Then I realised I could wave to walkers who were looking intently at this kayak calving through the water with little effort.....actually no effort!

This is what makes the Torque such a great fishing craft, your hands are free to fish! Whether casting or trolling it is an advantage to be able to control your speed, direction and position while keeping a rod in hand.  In a paddle craft, if you’re trolling, rods must be in a rodholder.  While motoring you can drop the tip of the rod, give lures a little more action by working the rod and you have the advantage that your rod is in hand when the fish strikes!

I found the silence of the electric really nice....no noise, vibrations or fumes that are sometimes experienced on a tinnie.

The Torque is very stable without the battery and motor fitted, and super stable with the electric fitted.

The Maximiser technology in this Minn Kota motor is fantastic.  It controls and optimises power to extend the battery life.  Some motors on the market are drawing full amperage from the battery the moment you engage the motor, regardless of your speed.

Another great thing about the variable speed of this motor is that you have full control over your speed.  On some throttle controlled electric motors the first gear is too fast if you are just trying to hold your position into the wind or tide.  The speed dial control can set the motor so that the prop is just ticking over.

Ok............the question your all asking...........how fast does it go?  Sorry it is not going to match it with an offshore racing boat.  The Minn Kota pushes the Torque along at about the speed a strong paddler would paddle a similar shape craft.  With the motor and battery fitted I was a little disappointed with the speed that I could paddle.  It is quite heavy to push through the water with a paddle.  Take out the battery and replace the motor with the plug-in skeg and you’ve got a nice paddling craft.  It is great that you maintain rudder function regardless of having the motor in or out.

If you enjoy paddling and only have a little interest in fishing this is probably not the kayak for you.  However, if it’s all about the fishing, the Torque is great fun and very effective.  It is apparent that Ocean Kayak have put a lot of thought into the design and features of this kayak.  I think there is an obvious reason that they (Ocean Kayak) have only released one electric motored fishing kayak into their range, they got it right when they designed the Prowler Torque.

The Ocean Kayak Prowler Torque retails for $2999.  It is also available as a package including a Battery Tray, 12V 7Amp Battery, Charger, Transducer Boot, Power Cable and Humminbird 385CXi colour Sounder & GPS Combo......all for $3990 fully installed, ready to go.  With both packages you’ll still need to buy a battery for the motor and a paddle, just in case!