Life isn't about finding yourself. Life is about CREATING yourself. - George Bernard Shaw -
05. April 2011

Back in May I penned this brief impression of the Wind 585 after my first paddle in our demo boat. I offered the caveat that I was loathe to form a view based on a two hour paddle, despite the fact that it was done in some very real conditions & gave me a solid understanding of what the boat was capable of. Subsequently, I have had the opportunity in the past few months to get out in the boat in a variety of conditions & put forward a more considered review of what the boat can, & can't do.

About me, I'm about 95kg, 6ft in heels, and an Australian Canoeing Level 2 Sea Instructor - somewhere around 4 Star BCU for overseas readers. I paddle a variety of boats, from my Valley Aquanaut for instructing through to an Epic V12 Racing Ski for my own amusement.

So, my observations on the W585 on flat water are that it glides nicely at a cruise, maintaining a very stead 8kmh without really any effort, and tops out at about 9.8kmh. This is the point where the hull resistance makes it pointless to try to go any faster on dead flat water. Having paddled & observed 21 boats over the same course in the past 3 years, this is the highest terminal hull speed of any of them, excluding the hybridized designs like the Valley Rapier & the Rockpool Taran. I think anything with a terminal hull speed above 9.5kmh on flat water will give you a good return for effort & allow you to train with a steady, but not overwhelming level of resistance, and is therefore an excellent choice as a fitness boat. The cockpit ergonomics are great, with well thought out integrated thigh braces, and a comfortable seating set up with plenty of adjustment. I'm yet to hear a dissenting voice about the seating set up on either of the Wind boats, but they've got to be out there, no seat is perfect! The entry point for the paddle is cut away, borrowing from racing skis like the V12, & allowing a closer catch than the 54cm beam suggests. The closer you catch, the further forward your catch, the higher your drive, the faster you'll go....

On flat water, the shallow but unmistakable V keel gives a notchy initial stability, which disappears as soon as you get moving. I can understand why some novice paddlers have described it as a little twitchy, however anyone with a good reserve of core strength or balance will quickly become accustomed to the feeling. Once the water gets rough, the secondary stability kicks in hard, with slabby rails not unlike the Rockpool GT or NDK Explorer protecting the paddler from nasty surprises in the rough. I'm now a very poor judge of stability & haven't paddled a sea kayak that I would consider even moderately unstable, so take my words with a grain of salt. That said, to me this boat is like a tank once the sea becomes more dynamic & the hull design begins to engage with the moving water.

Into head seas, you need to adjust your cadence to stop the boat bursting over the oncoming swell & slamming down, but significantly this doesn't slow the boat down. There are a garage full of 5.5m + sea kayaks out there that turn into very stop-start rides once steep head conditions unfurl, but the Wind 585 isn't one of them. Into a steady 15kn headwind, 1.5m of wind-generated seas, my GPS showed a consistent 7.5-8.5kmh at an even cruising output.

Downwind, the boat is surprising. It has only moderate rocker, & not the exaggerated bow sheer that you associate with our British boats, so my expectation was this lack of rocker combined with massive waterline length would make the boat a potential pearler in following seas. What I hadn't counted on was the full volume that carries a long way forward in the hull, & lifts the boat out of troughs when you get the inevitable kick from a following wave. Don't get me wrong, this is no surf ski, nor does it offer the out & out sports car ride of the Zegul 520 or North Shore Atlantic. For the sheer task of covering ground very quickly in following seas, it does a very efficient job. You can't lean forward & blast like you can in the Brit boats, but then again expedition paddling, covering large distances, is far less about the explosive nature of hull designs, & more to do with their overall efficiency & ability to handle rough water.

With a load of me + 45kg it got very solid in the water, and the flat-water notchy initial stability completely disappeared. The definition of an expedition kayak is that it must get better as it gets heavier within the confines of it's pre-ordained limits, and this boat certainly fills that criteria.

Overall finish is excellent, as we have come to expect from Tahe. There are 15 of these boats out in the paddling community now & we're yet to hear of a problem, leak or drama, so we can only assume that their initial good looks translate to hardy & reliable sea performance. The demo boat has been beaten up, paddled a few times a week for 9 months, treated poorly & still looks pretty damn fine. At $2990, this really is a lot of boat, very well made. Bloody hell, maybe we should put the price up!

We have changed the rudder system from our first shipment to incorporate the new SmartTrack 270 Degree Hybrid Foil system, which is the 'over-the-back' rudder pioneered in Tasmania many years ago. While we have had no issues with the 'stick up' version in the first batch, we think they're probably not as secure a set up for the inevitable catastrophe landing through surf on an extended trip.

If you're under about 80kg, or are looking for a skill developing boat that will allow you to blast through gauntlets & turn on a sixpence, then this isn't the boat for you. While the secondary stability makes this the most maneuverable 5.5m+ boat on edge I've ever paddled, it's still no Avocet, as you can imagine.

It would be a serious contender for me for long tripping, or as a boat with good ergonomics for getting properly fit in your kayak, punching out a training routine a couple of times a week. The hull is brutally efficient, without giving you the smiles per mile that our other designs offer, but hey, that's what covering ground on long days at sea is all about. 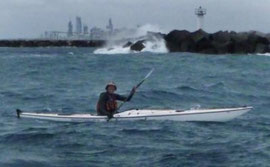